She was born Lola Shirley Graham Jr. in Indianapolis, Indiana, in 1896, as the only daughter among six children. Her father was an African Methodist Episcopal minister, her mother was European, and the family moved often.

In June 1915, Shirley graduated from Lewis and Clark High School in Spokane, Washington. She married her first husband, Shadrach T. McCants, in 1921. Their son Robert was born in 1923, followed by David Graham DuBois in 1925. 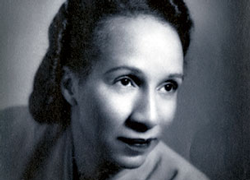 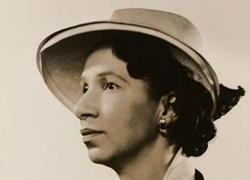 In 1926, Graham moved to Paris, France, to study music composition at the Sorbonne where she met Africans and Afro-Caribbean people and introduced her to new music and cultures.


In 1931, Graham entered Oberlin College as an advanced student and, after earning her B.A. in 1934, went on to do graduate work in music, completing a master's degree in 1935. In 1936 she was appointed director of the Chicago Negro Unit of the Federal Theater Project, part of President Franklin D. Roosevelt's Works Progress Administration. She wrote musical scores, directed, and did additional associated work.


In the late 1940s, Graham became a member of Sojourners for Truth and Justice – an African-American organization working for global women's liberation.[1] Around the same time, she joined the American Communist Party


Shirley Graham Du Bois died of breast cancer on March 27, 1977, aged 80, in Beijing, China. She died as a Tanzanian. She had moved from Ghana to Tanzania after Ghanaian president, Kwame Nkrumah, was overthrown on 24 February 1966, and became close to Tanzanian president, Julius Nyerere, and acquired Tanzanian citizenship.